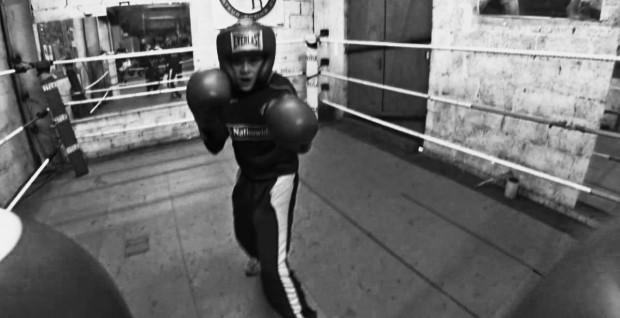 There was a flash of leather in my face and suddenly I was looking at the ceiling. When I looked back down, the bastard was already moving to my right. And when I turned to follow him, he just stabbed me again with another jab to the face. I felt something burst behind my front teeth and then something warm leaked down my nose and into my mouth. Ten seconds into my first fight at King’s Boxing Gym in Oakland, CA and I was already on the rag.

Two weeks after joining the gym and I was already salty. I wanted some action. But the coach wasn’t letting any newbies spar. Nevertheless I insisted. In my arrogance I figured, “hey I fought for my high school’s karate team and I didn’t do no pussy kata’s either (the display of posture, patterns and movements), I did kumite (competitive fighting)!” But this was not karate where fights lasted in two to five second blitzes; this was boxing, a three-minute, all-out, fast-paced hell with just you, your opponent, and your inadequacies. Needles to say, I wasn’t ready. I lasted two rounds because my opponent (this “white boy” I thought I could bully) bestowed mercy upon me.

Sitting in the corner—heaving and humbled—this little black girl came and began wiping the blood off my face. “You did good,” she consoled me. She was probably one of the gym residents because she obviously knew what she was doing. And she knew what I was—a beginner, an amateur. At the time all I had was ego, not pride. And there’s a difference. Pride is earned, ego is for free.

That day I learned a lesson: Respect your opponents.

But holding back for what? For the right feeling? For the right position to throw the right punch? For the right opportunity to come that deserves my best? Bullshit! In reality, what it really was was fear. I was afraid that if I give it all I wouldn’t have anything left. I used “not the right time/place/person” as an excuse not to give it my all because deep inside I knew I really don’t have much to offer. I was always coming from a mindset of scarcity—always wanting, always stringent, always passion-deficient.

That day I learned another lesson: Respect your opponents; just make sure they respect you more.

Combat sports has taught me a lot more about being an “artist”(that word that needs to be handled by a pair of pliers) than in any academic institution. It taught me the value of putting yourself out there, getting immediate feedback, and making real-time adjustments not when your comfortable but while in motion. It taught me how to deal with myself and my illusions. It taught me that the only real way to learn is through action, not by thoughts, theories or words. If you are not getting in the ring with an opponent, you are not really boxing; you are merely doing Tae Bo with a heavy bag.

In the same vein for any pursuit, “Declaring intent is not execution.” —Mark Twight.

The myth of “the right moment”—that one raffle draw in which all your problems will be solved—never truly exists. It is nothing more than an emotional absinthe, a psychological crutch for wanting to escape the true science and poetry of the craft: blood, sweat, and time. Because the fact of the matter is, the culmination of what you do in every minute of every day is what counts. It is what will prepare you for that juncture that will change your life forever. The journey is always more important than the end. The time that requires your best is now—not later and not in the future.

Don’t wait for the dark clouds to pass; instead meet them at the summit. Drink the storm and ride the lightning. Success is a thin layer of ice and underneath it is chaos. You cannot fight it; instead you must attack it.