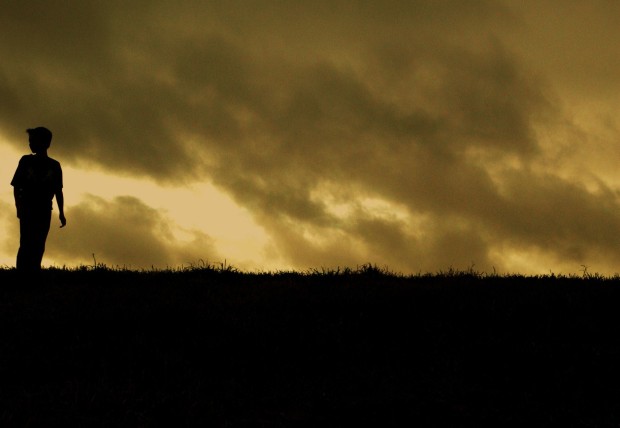 Maybe it was because the car in front of me was leaving too much space in front of him; or maybe because it was the fifth road traffic collision of the day; or maybe because there was nothing playing on the radio except that stupid Bastille song with the chanting monks going “EH-EH-OH! EH-EH-OH!” which is probably the lamest chant in chanting monk history, which then forced me to turn to NPR.

It was All Things Considered, and the segment was talking about how modern cars are changing the father-son ritual of working under the hood as a way of bonding. Anyway, when I caught it some guy was saying that this all-American activity (which is so poignant and powerful that it is practically embedded in the Hallmark visuals in our minds) is already obsolete because cars nowadays have become too sciency. Further he claimed that this was a good thing because such activity comes “in the context that the father probably never said to his son, ‘I love you,’ or kissed him or hugged him.” Because he said that modern dads are just more “hands-on and emotionally involved” compared to dads from before.

Listening to this I felt acid rage fizzing in my mouth. How the hell did this guy come up with that shit? Clearly someone forgot to feed the hamster in this depraved creature’s brain.

Then this boy scout leader came on and said: if I was to give fathers advice for bonding with their sons, the best advice I can give is to tell their boy to “read the owner’s manual and join triple A.” Lastly, the segment concluded by saying, “leave the cars to the experts and just tell your son you love him.”

And at this point I was thinking, can we please crucify these motherfuckers and burn them at the stakes?

“Sorry, son, but I can’t help you. You better ask your mom, or better yet call triple A. Oh but remember, I do love you.”

“Eat shit, dad! I hope you overdose on that gluten-free, recycled-feces, wheatgrass drink so I can collect on your life insurance policy! What a fucking disgrace! Now give me my allowance so I can pay for my student loans, you punkass bitch!”

Now I’m not saying that all fathers and sons should bond by working on cars. Obviously there are other things to do. But that’s not the point. The problem is people seem to be missing the significance of the iconography, the importance of the ritual. Because although you don’t hear it very much, everyone knows that men bond differently compared to women. Generally in nature, mammal females have a natural affinity for each other just on the basis of being female (I’m not negating envy, gossip and ruination, just pointing out basic cooperation and civility within the group); males, on the other hand, often have to prove themselves first through challenge or participation. This comes from our preinstalled caveman DNA, which perceives other males (especially strangers) as possible threats rather than probable allies. In any case, when a newbie comes, he is not immediately accepted into the fold. First he has to be tested. Initiated. Because respect (just like trust, loyalty and love) is always earned and never given away. Otherwise boys grow up to be homogenized, dependent ingrates who think they’re gangsta because they went to jail for missing a court date. That is why in almost every tribe, culture, and religion there is a rite of passage for boys. This is to officially inaugurate them into manhood and to help them unlearn the follies of their boyhood. We don’t see this anymore in mainstream U.S. culture, but for better or worse, such rituals are still being practiced today in athletics, the military, and even in street gangs. Why? Because it works.

Now this may sound all “macho” and shit, especially with a gender-neutral state of mind; but the fact remains that womanhood is activated by biological triggers, while manhood has always been largely triggered by consequence or choice. Simply put, without instruction, without a proper program, males will simply not grow out of their boyhood. A life changing experience, whether formal or informal, has to happen. And we need fathers to enforce this through patience, logic, or by beating seven types of shit out of us if need be.

For this, I am the best example I know. As a child I was a shameless, meatball-eating, butterball. My father was an engineer and would often work on two-year contracts abroad, and as such my mother would spoil me rotten. In time,  because I exploited my mother’s tender heart, I became a gluttonous, puddle of shit with a dim and alarming future. When my father came back and saw the sad state that I was in, he quickly whipped me into shape. Immediately in effect, I wasn’t allowed to eat without finishing my homework; I had to cut down dessert to once a day instead of three times a day; and I had to exercise at least five days a week, performing a hundred push-ups, a hundred sit-ups, and hundred jump n jacks each and every session. Needless to say I hated his guts for the rest of my childhood. But looking back as an adult, I came to respect and appreciate my father more. Such discipline got me straight-A’s, enabled me to skip a grade, get into good schools, graduate with a 3.8 GPA, get muscles, have different sexual experiences, and obtain ungranulated balls to follow my dreams and take ownership of my life.

Now, in today’s cynical and statistically-minded world, some will argue the opposite by throwing in some facts they just happen to google. And I must say, I am not arguing against facts. True that boys’ high school dropout rates has come down from 10% to 7% in the past decade; true that boys are 40% of U.S. Bachelor’s degree holders; and true that males unemployment rate (20 and over) is only 6.2% per July 2014; but it is also true that boys still account for 666% of gang violence, school shootings, and intense nights of Magic The Gathering and Diet Mountain Dew. Now we can all keep telling ourselves that all of these have nothing to do with it, that boys are naturally tame and their built-in rage is just some sort of nasty stereotyping bullshit. Or we can drop the semantics, drop the macho attitude, and just accept that there is a proper way of nurturing boys. Because at the end of the day it doesn’t have to be complicated. What is said is not as important as what is done. All we need to realize as a society is that we are not trying to raise boys; instead we are trying to raise men.

Till the next rant!