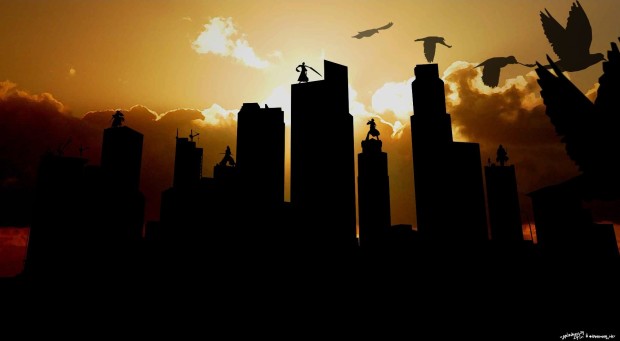 Gone is the age of Kings, of Royalty and Executives. Gone are the days of being tapped on the shoulder and becoming “discovered.” Gone are the studios, the record labels, and the idea of Hope because now man can lay claim on his destiny once more.

Free of institutions, titles, and guidelines, the ronin wanders as a rebel and a vagrant. A vagabond in the eyes of many, he has long ago thrown away the dagger and the plate, and now carries with him the strategies and tactics he has acquired from his former academic lords. Masterless and socially adrift, he climbs heavenward into the clouds on the back of the serpent—the ancient star-spangled snake.

Hurled into the centrifugal force of Wall Street and cyber space, he is instantly met by a stream of dedicated non-thinkers on TV: the depraved and debased cynics, the bile-faced despisers, the castrating thundercunts, and the love anorexics who sell confidence-boosting suppositories to the masses of the walking dead.

But the vagabond does not pay attention to any of these for he is fortified with battle-tested philosophies. In his journey he has sought out techno shamans, cyber blacksmiths and modern Icaruses to aid him in his quest for that lost essence, that first lightning that crosses a child’s eyes. He might go hungry and destitute on occasion for he has no investors and lobbyists to back him up, but he knows he has his skills to rely on. When he is blind, he uses his ears; when he is deaf, he uses his hands; when he is unarmed, he uses his teeth; and when he has nothing to bite with, he tells his jokes for he knows that it is only through laughter that one can truly slay. Isolated but not alienated, he dances on the silver threads of the black widow because he is a fox; and foxes know never to show fear in the company of wolves.

From time to time the vagabond hides himself from the world to observe the protocols of the dark. There, suspended in time and emptiness, he meditates with ferocious intensity to do battle with himself and listen to the hearsay of his soul. Does my today refute my yesterday? How many minds and eyes will I open in my lifetime? The worms of doubt and deceit dig deep, but the vagabond is a veteran. He is seasoned without contempt and unlike those who are ripe for the sermons of counterfeit clerics. Purified with madness, he no longer carries with him that pubescent idea of changing the world—of curing mankind of his base affliction—for he knows it is only himself that he can truly change.

In his pursuit, the vagabond sometimes encounters strange creatures and fiends that solicit and require his talents. And one day, as he is passing through the stone forest, he comes upon the Sleeping Cave where the Dragon of Dreams dwells.

Inside the cave is a wordless place, occurring in the meta-moment of chance. And there in the depth of blackness, it begins to rain—soft and pouring, dew-like and serene. Then in a cataclysmic force, the Dragon suddenly erupts from underneath him. Its face is cast into a cushion of darkness, its malevolent eyes flaring in molten heat.

“WHAT MANNER OF WARRIOR SEEKS AN AUDIENCE WITH ME TODAY?” It asks in a voice with the force of a hurricane. “IS IT ANOTHER KNIGHT OR MAYBE A PRINCE? WHAT ARE YOUR QUALIFICATIONS? WHAT ARE YOU WILLING TO GIVE IN ORDER TO FILL THAT SEARING HOLE IN YOUR HEART?”

Many have tried to cut down the coveted beast, but most have fallen for the Dragon is eternal, like an ever reaching abyss. It asks but does not give. It takes but does not wait. And in the end, all a man has left is his remaining years in failure and despair.

The Dragon licks its lips just as Death wets his sickle.

“I do not serve a master,” the vagabond answers, his blade rising between the raindrops. “I don’t have degrees or references for I am neither a knight in shining armor nor a prince on a white horse. I am a motherfuckin ronin and this is my dragon-slaying sword.”