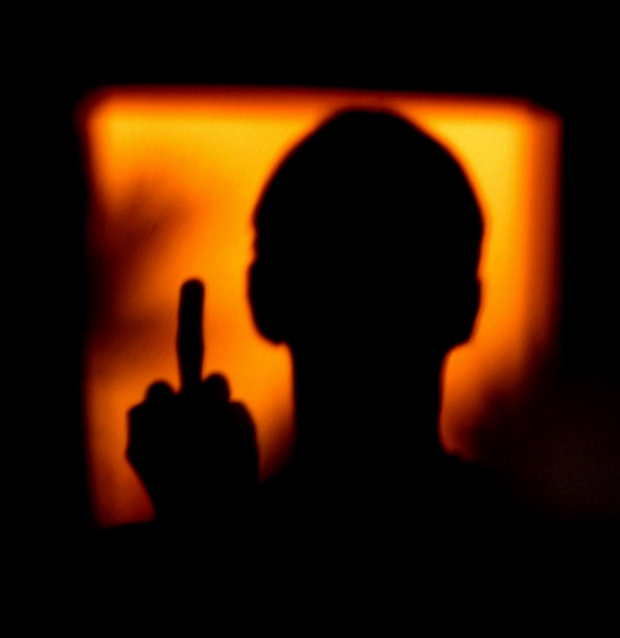 Well respectfully what I say to that is, go fuck yourself.

Whether it’s the s-word, the c-word, or the f-bomb, pseudo-swearing is a halfhearted attempt at an empty gesture. It’s like saying “I don’t eat meat,” and then buying fake meat. It’s like saying “I’m an atheist,” and then going to an atheist church. It’s like feigning offense when in fact what you’re really afraid of is getting disapproval from other people—mainly from your version of the ruling class.

Despite its commonly accepted purpose, these squeaky-clean, prim and proper “frustration words” are not there to protect children or display poise and refinement; instead it is there to offer an illusion of righteousness and respectability for the would-be adults. I mean, these fucking sausage-jobs are so uptight you couldn’t slide an American Express card between their asses.

You see, when you were young you didn’t know how to cringe and squirm and knot your forehead at cuss words because you didn’t learn that they were filthy yourself. You didn’t learn that they were “bad” from cartoons, movies, song lyrics, etc; instead it was the adults that taught you that. Then in your teens you developed a strong acuteness for hypocrisy—a bullshit radar—and found out that most of these models-of-society types are nothing more than self-aggrandizing bastards. And then you said to yourself, “fuck that shit.” You didn’t want to be your parents’ advertisement for their tastes. You didn’t want to be a reflection of what they wanted to become. And so you started to rebel. You didn’t know what you were revolting against, but you knew you were your own person. But somewhere along the way you acquiesced. And eventually through institutionalization and cowardice you became what you hated the most—fake, frigid, and fucking ridiculous.

That’s why most adults can never remember what it was like being young (much like teenagers cannot remember being two-years old). That’s why for the most part they cannot relate.

Profanities are meant to express muscular passion, destruction, humor and pain. It is not afraid. It is not passive-aggressive. It is direct language—language with a pulse.

“You show me the English equivalent to ‘fuck off’ and I’ll happily use it. It certainly isn’t ‘go away.’ …That’s why you never read, ‘fuck off, he hinted.'” —Billy Connolly

And if it just so happens that some do get turned off or offended, then good. Fuck them. You don’t need people like that in your life because there will always be people like you. Better now than later. Find your audience and more will find you.

Just like disease, tragedies and death, profanities are a fact of life and a real part of life. Closing your ears and shutting your eyes don’t make it go away because it is not meant to be censored. It is meant to be used—properly, creatively, with conviction, authority and balls—to express something “regular” words can never express.

So if you still feel not very well versed in the intricacies and application of profanities, please take a second to watch the video below. Learn proper English by using the word “fuck.”